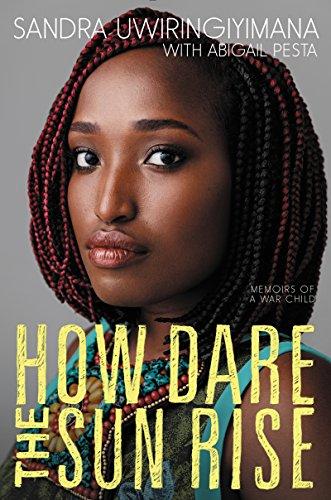 Reviewed by Claire, a Teen Advisory Board Member

“How Dare the Sun Rise” by Sandra Uwiringiyimana is a memoir about the author’s experiences as first an ethnic minority in the Congo (presently Democratic Republic of the Congo), then a displaced person in Rwanda, and finally a refugee living in the United States- all before she finished middle school. These experiences once led Uwiringiyimana to shut herself away from her painful past and bottle up her negative emotions, but as Uwiringiyimana grew older, she grew to see how sharing her experiences can help her cope while also spreading the word about issues many Americans don’t realize exist. This memoir is the cultivation of Uwiringiyimana’s journey to becoming a voice for her tribe and many other refugees.

The book begins with a recounting of the massacre Uwiringiyimana experienced at a refugee camp when she was ten years old. No, this is not a spoiler; it was on page 1. That night, Uwiringiyimana watched her six year old sister die as her mom, who was carrying her, was shot down. Believing her mom to be dead and with the barrel of a gun pressed against her own head, Uwiringiyimana said “good-bye, life,” believing they’d be the last words she ever said. Somehow, Uwiringiyimana escaped, but the trauma remained, as it does for many refugees in situations like hers.

Uwiringiyimana’s story is that of a woman who was raised by survivors and forced to become one herself. Her resilience bleeds through the pages, alongside her grief and suffering. Even just looking at the cover, you’ll see her face staring back at you, serious yet expressive. This is because, although the book discusses intense, dark topics, Uwiringiyimana incorporates all complexities of her emotions into her words. Even when sharing joyful memories of the life she had as a child before she fled, these experiences are tainted by the pain she feels looking back. Similarly, the negative emotions she expresses as a war child are marbled with occasional moments of happiness. Reality is complex, so emotions are too; no memoir better reflects this than Uwiringiyimana’s and no cover could better prepare you. Looking at the book now, every emotion this book made me feel is coming back as I see her face on the cover.

I highly recommend this book to people who do not know much about the lives of refugees. One of the strongest messages is of Uwiringiyimana feeling little empathy when she moved to America, but realizing later on that it wasn’t that people didn’t care about her situation- it was simply that they did not know how bad it was. This book exposed me personally to my own ignorance, and I believe that if others also read this book, they can grow as I did. Uwiringiyimana’s story is real, and emotionally provoking- it’s hard to read this book and not feel something inside of you change.