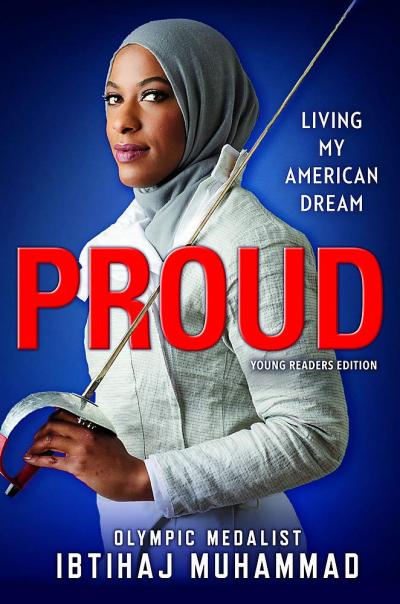 Reviewed by Claire, a Teen Advisory Board Member

“Proud: Living My American Dream” by Ibtihaj Muhammad is an inspiring memoir written by an Olympic medalist and fencer that details her life journey and how her faith, family, and determination propelled her toward success.

As a black Muslim woman who wears a hijab, Ibtihaj has faced discrimination, exclusion, and doubt cast on her abilities simply because of her identity. However, she never gave up- and this book teaches her readers that they shouldn’t either.

As Ibtihaj began to make a name for herself in fencing (eventually becoming the first American Hijabi to participate in the Olympics), she discovered that her actions meant something to other Hijabi women. By succeeding in her career and representing Team USA in international fencing competitions and the 2016 Summer Olympics, she was able to exemplify how Muslim-Americans were just that: American. At a time when anti-Muslim hatred was quickly spreading, Ibtihaj made a statement and did not back down.

Reading the memoir, I discovered how on-brand this bold behavior was from Ibtihaj. She only started out fencing because she wanted to use athletics to win scholarships to pay for college, and seeing how everyone was covered up in fencing (just like she would be as a Hijabi), she perceived it as a sport where she’d effortlessly fit in. However, time and time again, this was not the case. Whether it was because the predominately white space made her uncomfortable, or because her coaches and teams repeatedly excluded her and treated her as an outsider, Ibtihaj even quit fencing multiple times over the course of her career. But, she just kept coming back.

As if her empowering story wasn’t enough to catch my attention, the casual tone and quick storytelling made it a very easy read. There were times when I simply could not put this book down, and trust me, it’s rare that nonfiction has this effect on me. Ibtihaj’s personality absolutely shone through the pages and I finished the book feeling like I’d met her and become close friends. As the third child of six, Ibtihaj treated the reader just as she would her siblings, even including several pages of advice for us at the end of the book like an older sister might.

Of note to readers of all ages, Ibtihaj’s story comes in many forms. The book I read was her young adult version, but she also has a more comprehensive recounting for adult readers. She's also written a children's picture book, "The Proudest Blue". Additionally, she has television programs, interviews, articles, and more all dedicated to sharing her life and her story. If the young adult book isn’t for you, I highly recommend you check out other options, or even experience both- I know I did! She is more than just a fencer- she also created a clothing line named Louella (after her dear grandmother) directed toward Hijabi women who might struggle to find modest formal wear. She was also named one of Time’s 100 Most Influential People in 2016, and works to this day as an activist for Muslim and women’s rights.